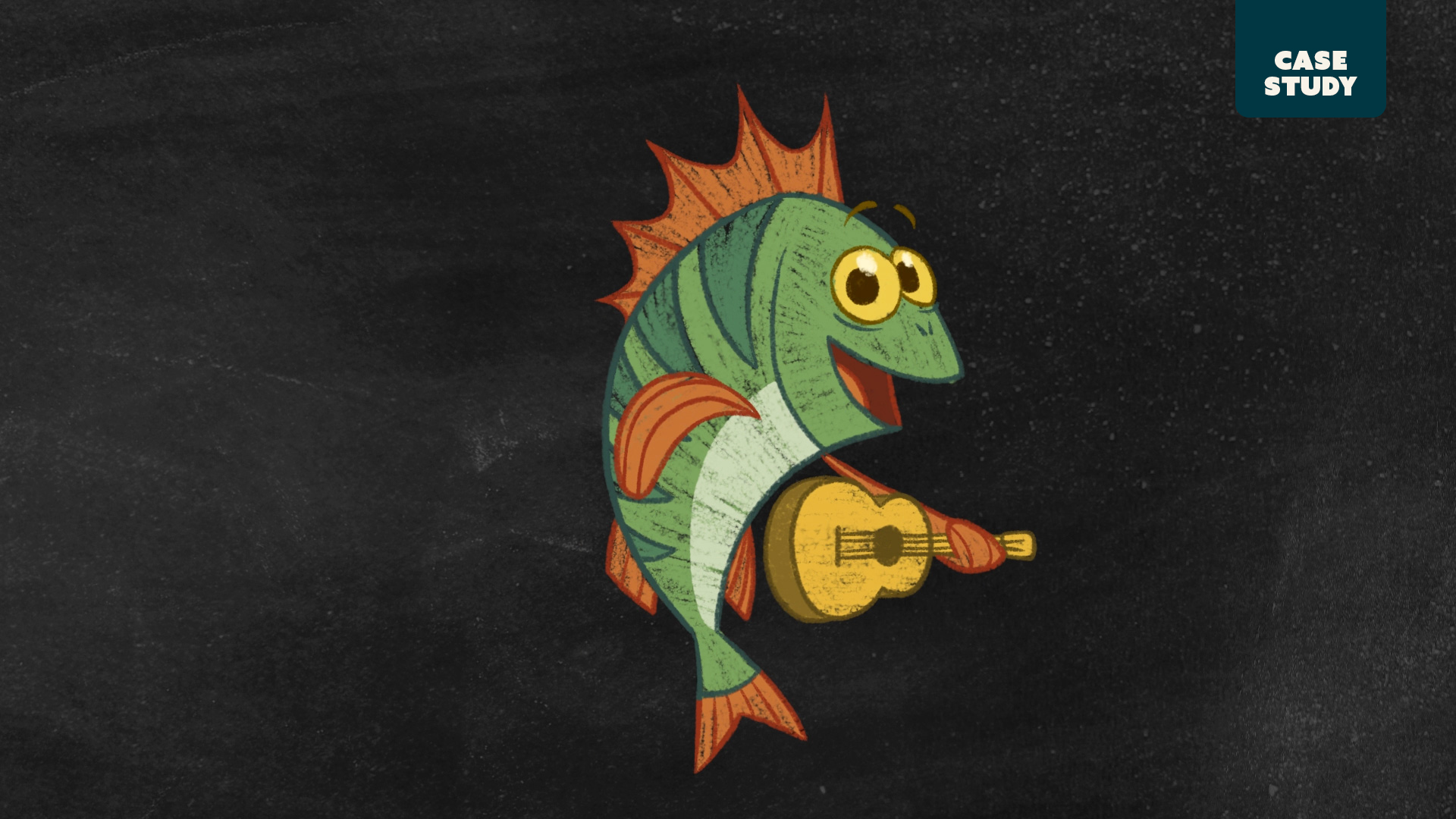 Singing at the Fish Counter

K-Citymarket is one of the biggest grocery store chains in Finland. In 2018 they partnered up with ad agency hasan & partners to promote domestic fish and get more traffic to their fish counters. When animation was chosen to be the star of the campaign, we hopped on board. Here’s how it all went down!

Brink teamed up with hasan & partners to create a unique and entertaining campaign for K-Citymarket, promoting domestic fish to families. The audience immediately welcomed the ad and it started to live its own life thanks to social networks. The ad was both loved and hated but most importantly it evoked feelings and discussion.

The campaign results exceeded all the expectations and campaign targets and it created a long lasting effect on K-Citymarket’s fish sales. Now most Finnish people remember the perky animated perch and its fishy friends who sing about, well, the benefits of eating fish!

It is widely acknowledged that having fish in your regular diet is not only a delicious and healthy option but eating domestic fish is a sustainable choice.

Nevertheless, Finnish people eat less and less fish: some people are not familiar enough with the protein, some lack the confidence and know how to cook with it, the price of fish is perceived too high and especially kids are hesitant to try any unfamiliar fish dishes. 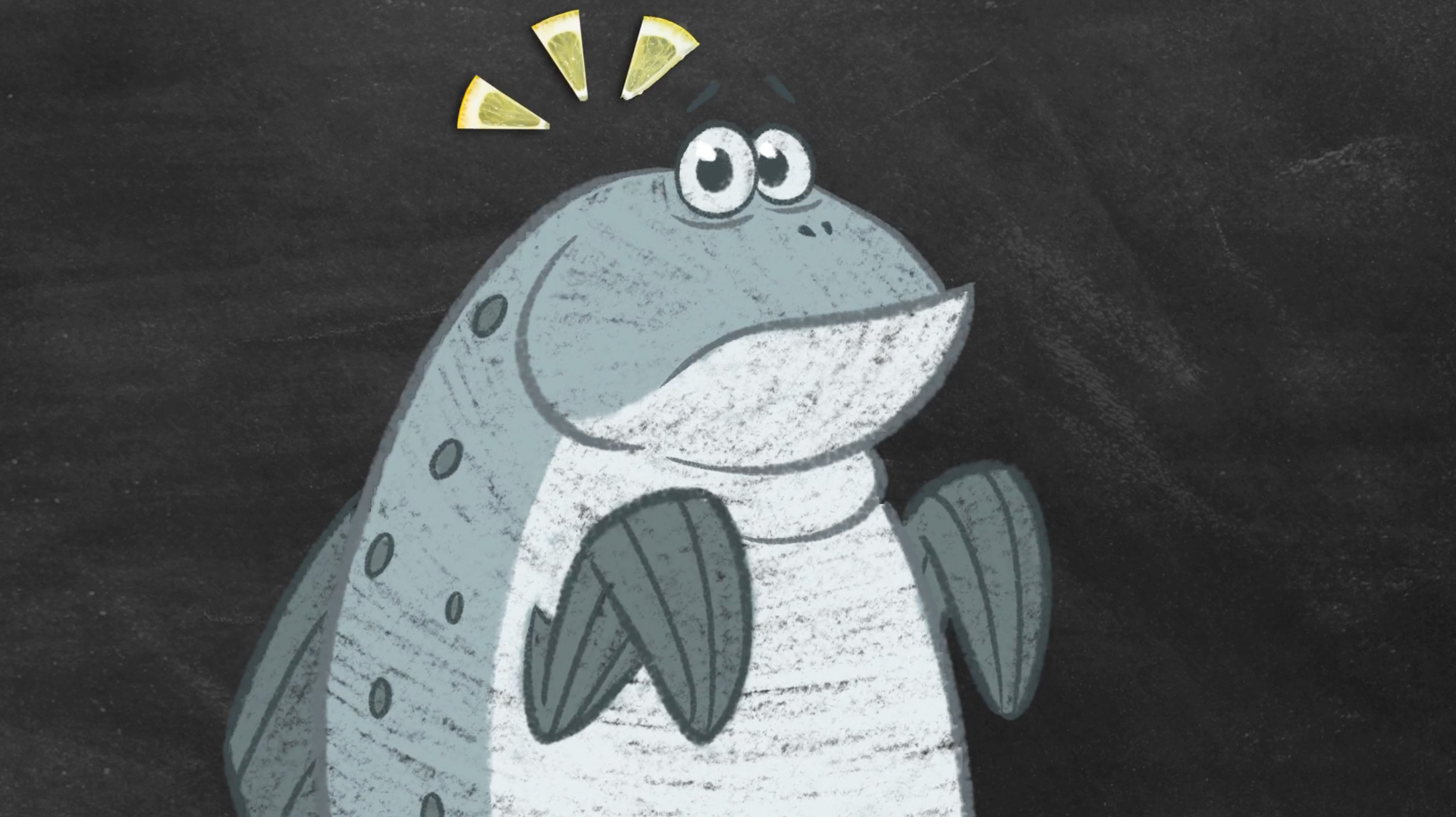 K-Citymarket had also experienced the decreased fish sales for a few years in a row and now they wanted to act to switch things around. As a result, they started to plan a bigger brand campaign called “Täyden kympin kala” with hasan & partners to promote domestic fish and get more traffic to their in-store fish counters. The main target group was families with children since children have a strong impact on families’ eating habits. Thus, the main element created for the campaign to reach the target group was “Kalalaulu” (The Fish Song) music video. To ensure that the message gets through to their target audience, hasan & partners decided to pair the commercial jingle with good old animation.

That’s when hasan & partners approached us with their super catchy and funny jingle already written for the music video and asked us to design memorable visuals and storyline to go with it. And oh boy we were inspired from the minute we read the brief let along when we heard the song for the very first time! Who wouldn’t love the idea of an animated fish singing and encouraging people to eat more fish! Even better – the ad agency didn’t want to limit our creative process in any way at this point so we put our brilliant minds together and started to create something magical!

Brink’s artists have a strong character design background and considering the young audience as the target group, the synopsis screamed for super sympathetic and relatable characters which the kids (and their parents) would love!

Using recognizable characters in advertising has been a powerful way to get the message through since the early days of advertising, especially when trying to engage with younger audiences. For instance, Kellogg’s Rice Krispies Snap, Crackle and Pop gnomes have been helping to make the Rice Krispies cereals on top of kids and parents’ minds for over 80 years! This only proves that well thought out characters are not only memorable but they can talk to customers over decades.

But creating successful and memorable characters is so much more than just drawing a few nice looking figures; you really need to dig deep to each character and think about their personalities, how they speak to the brand’s target group, how their personalities are seen in their appearance and design, how the characters move and what kind of gestures they have. 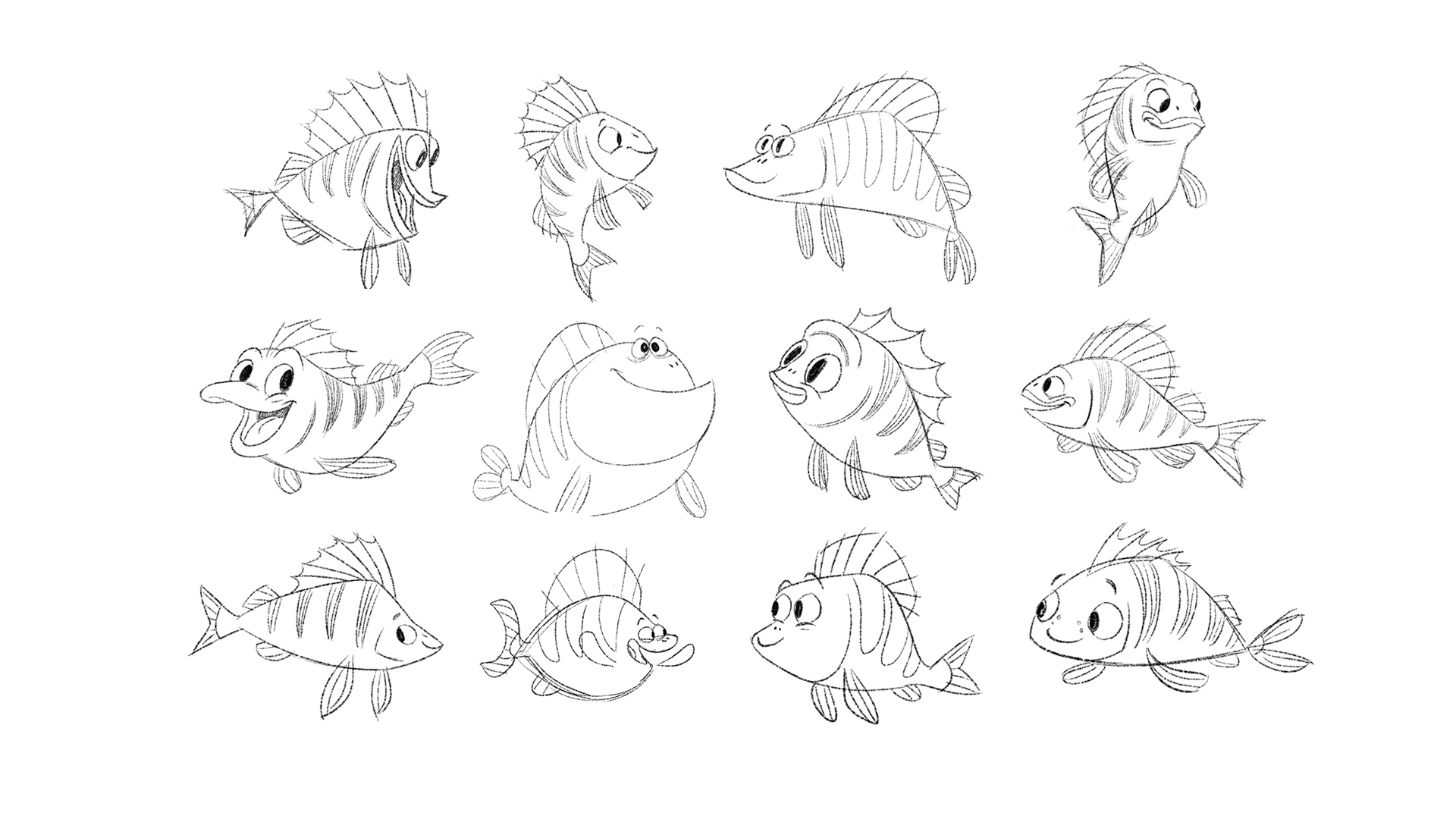 Well thought out characters create interesting, seamless and believable storylines and visual experiences for the viewer. Our artist at Brink really put their best effort to give life to these characters, even if they were on screen for only a few seconds. 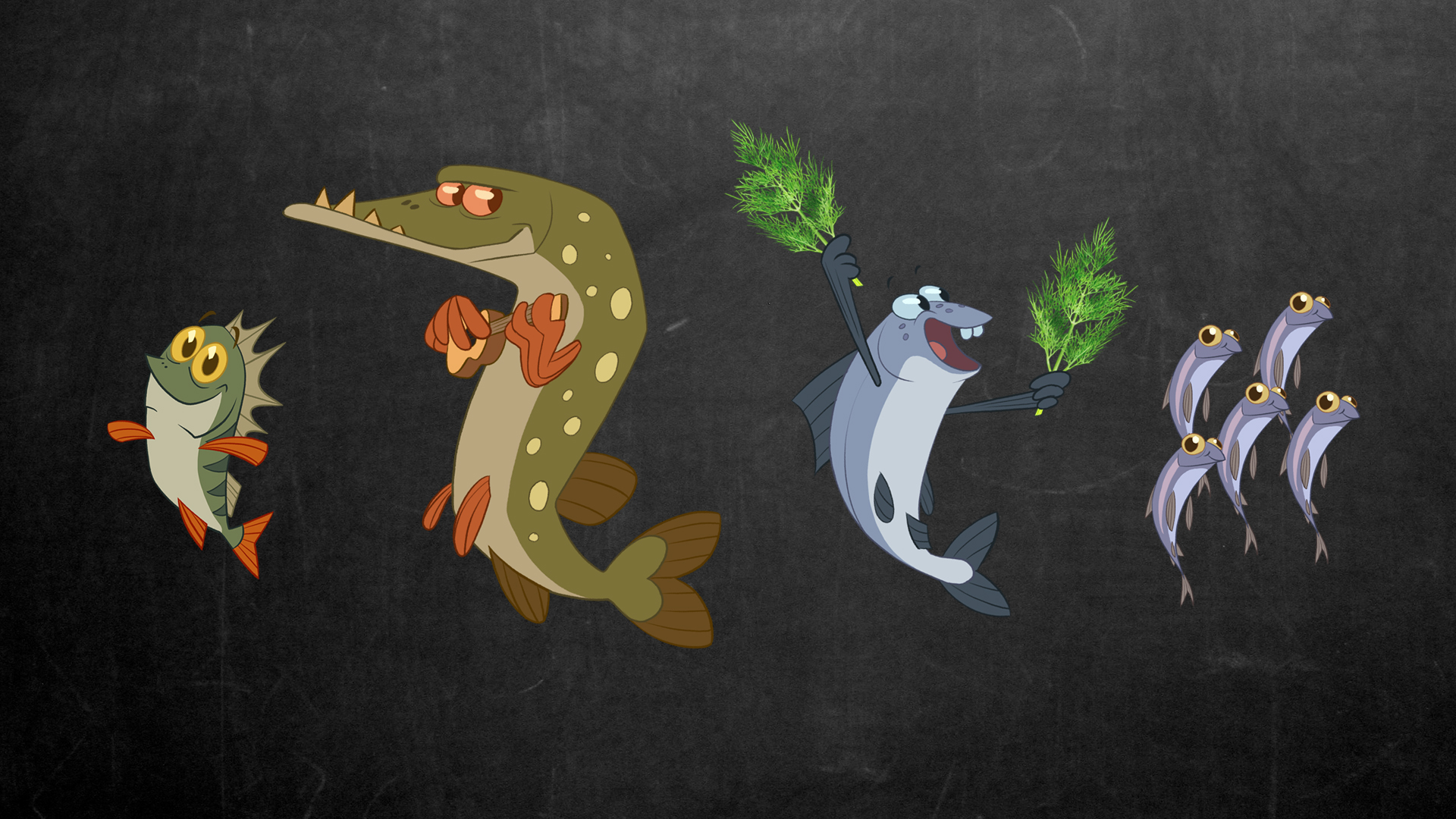 The perch (our main character) is a hyper positive adventurer, the pike is a gentle giant with an affinity for the ukulele, the whitefish is always there to cheer you up and the vendaces are lovable school of fools, ready to follow a strong leader to any end.

So we designed the characters and pitched in a few gags of our own. The client was open to almost all of our ideas even though some of them might be regarded as a bit dark, twisted and inappropriate (such as the juicy cannibalistic undertones when the main character perch is so excited to encourage people to eat more fish). After presenting our ideas to the client and ad agency we quickly understood that we’re the right partners to take this campaign to the next level.

The goal was to produce a feel-good hand-drawn commercial with an old-school flare, like something not totally out of Warner Bros’ catalogue. Something that is so interesting that it doesn’t bore the audience after they have seen it once. Choosing to go with hand drawn animation gave us the opportunity to make the characters do whatever we wanted, also in  three-dimensional space. 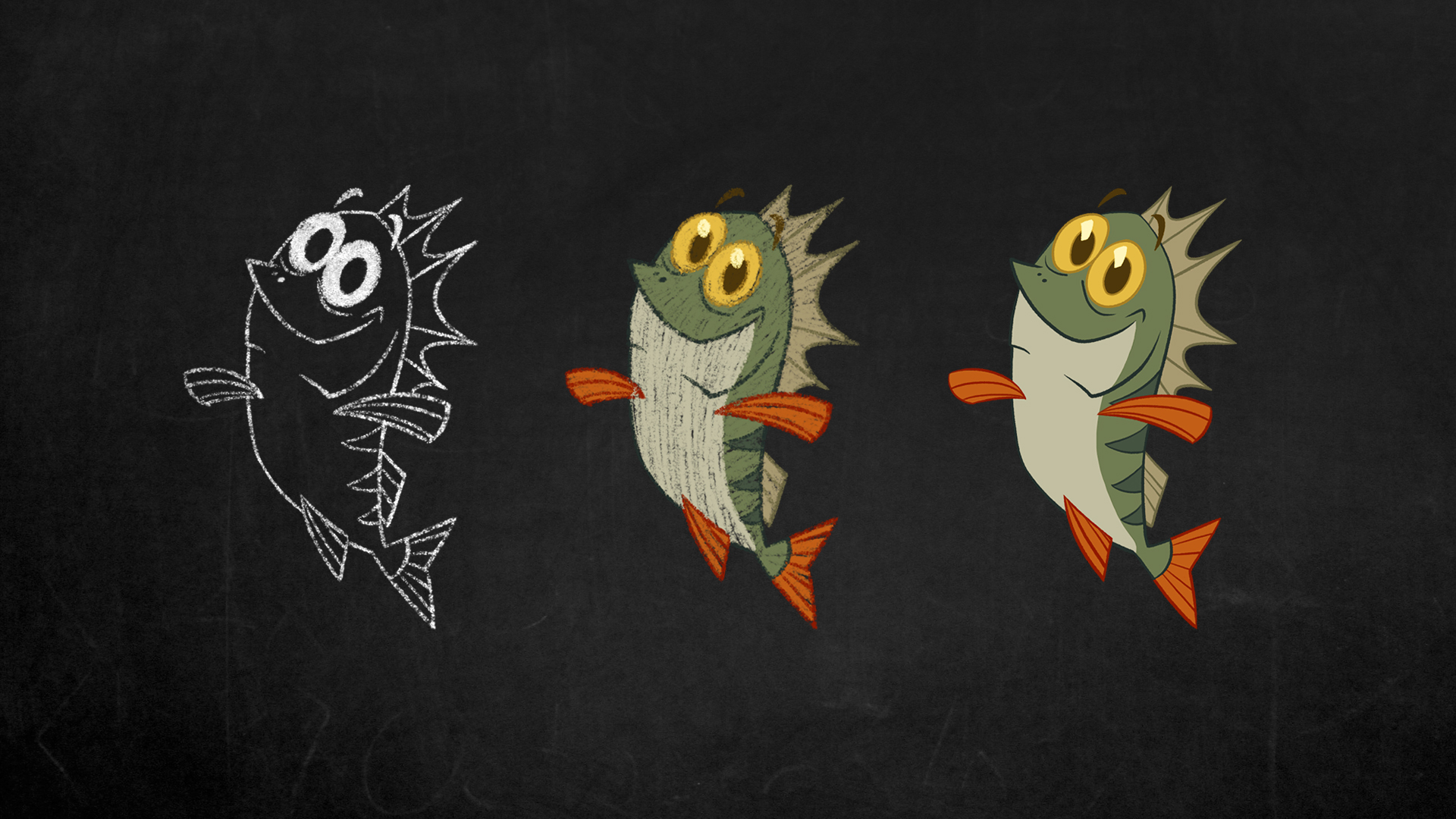 We also wanted the characters to maintain an organic look instead of having solid colors usually associated with computer-generated images so we decided to colour them by hand – as if they were drawn with chalk on a chalkboard. Chalkboards are often seen in restaurant environments and used as menus so it also fitted the mood of the video where we were basically playing with food. To spice up the visuals further and create associations with real food and deliciousness we made animated effects out of bits of food photography and even did a few pythonesque shots of cut-out animation.

What was great with our characters and visual style was that they also gave flexibility in terms of the applications in other media and promotional material. The animation and its cut down version were run on TV, online, social media and movie theaters and the song in radio and Spotify, but the characters also worked perfectly without the animation: they were used in prints, websites, out-of-home advertising, social media and in-store point of sales materials.

RECEPTION OF THE CAMPAIGN

The public welcomed “Kalalaulu” with open arms! It caused a lot of discussion: judging by the customer feedback K-Citymarket received some absolutely loved the commercial and considered it the best commercial ever, while some people couldn’t stand it and thought it was annoying. Some commented that they started to eat fish because of the campaign and some wanted to know if they can download the song from somewhere. Even though not everyone liked the ad, most people knew it by now and were talking about it, and it started to have a life of its own in social media channels. 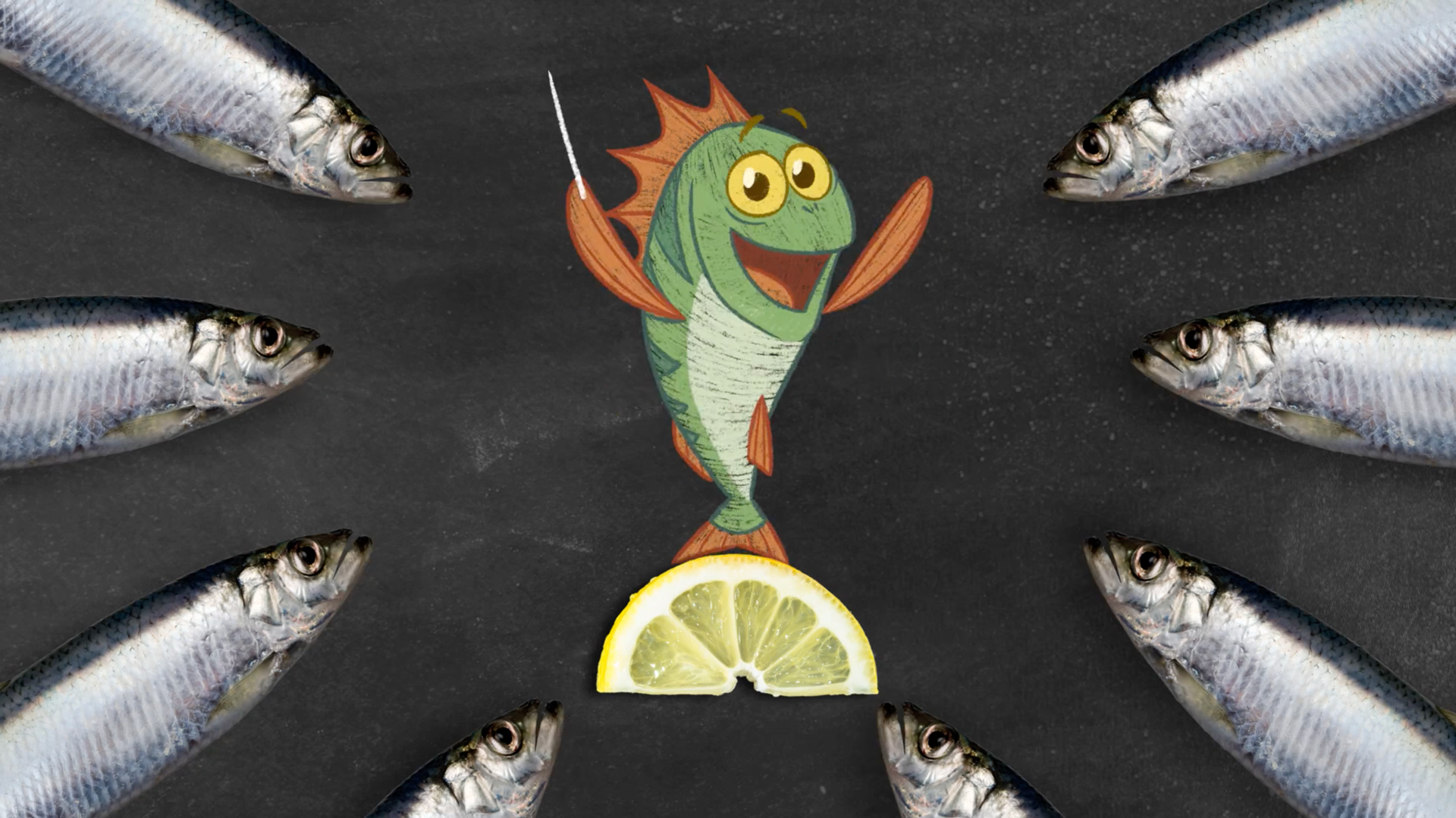 Numerous versions of the fish song have been produced and shared, for instance, in Youtube, TikTok and even these versions have hundreds of thousands of views. The fish song also succeeded into reaching the target group through channels, such as Whatsapp groups, Jodel and other private channels, that have been traditionally out of reach from commercial influence. Thanks to the new digital age, commercials that are able to entertain their viewers, and thus, making them want to share the commercials via social media channels, can spread like a plague outside bought media. That is exactly what happened to “Kalalaulu”, and consequently, it is impossible to estimate the total views the video has so far achieved.

The campaign was a total hit! Its success was not only limited to amused viewers and enormous word of mouth but it was also evident in the final figures. Due to this bold, out of the box and stand out campaign the end client did not only achieve their initial goals but the results exceeded all the expectations and initial numeral targets! 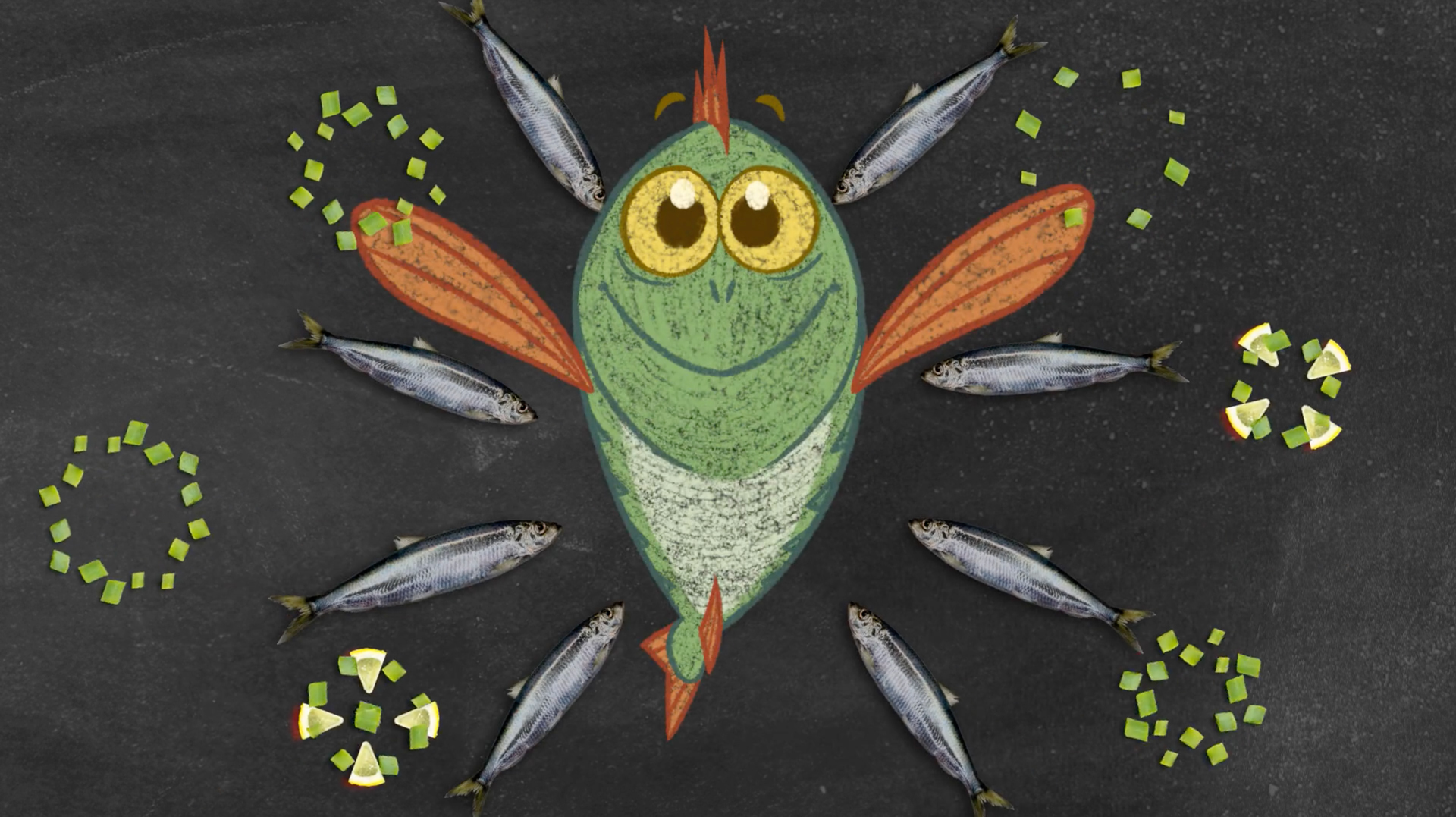 The fish sales increased in all target groups, especially within families with children and women. The campaign also strengthened K-Citymarket’s image as the best place to buy fish.

The numerical results speak for themselves:

The cherry on top of the cake for us was that “Kalalaulu” also won “The Audience’s Favorite Seconds” -category in Voitto-gaala awards in 2019, voted by the audience only. What could be a better price and recognition for our work than being chosen by the Finnish public!

Another reward for us was when the campaign got a sequel the next year with lots of new materials (AR application, new characters for educational fish cards etc) due to its previous success and we got to create yet another set of amusing visual elements! Yet again the public welcomed the animation warmly to see how the story continues after the first fish song.

The success of the campaign has really made us proud since the characters and visual world we created are so close to our hearts. It was the combination of a brilliant synopsis and a catchy melody, understanding the audience and choosing the right channels to reach them and creating the visual style and sympathetic characters that spoke to the audience and connected with them. It was giving the kids something they are familiar with and something they can relate to, something the kids and their parents will recognize, because recognizable means memorable. But most importantly, the commercial was truly entertaining and it can still be heard in people’s households long after the campaign is over!

Even though many companies have been starting to realize how to utilize illustration, animation and characters in their marketing and communications, there are still so many brands who are missing the opportunity to use these elements to better stand out and connect with their audience.

Are you ready to leave your stamp to creative visual storytelling history, be on everyone’s lips and boost your sales like ever before? Hit us with a message and we’ll be delighted to tell you how we can help your brand or product to stand out!